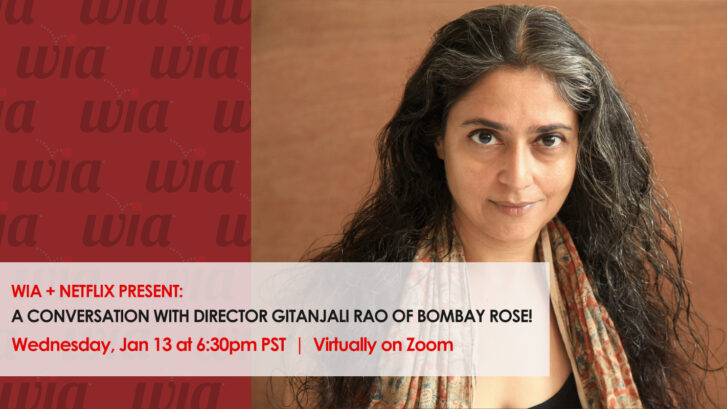 Join WIA for a conversation with the Director of the forthcoming animated feature film “BOMBAY ROSE”!

BOMBAY ROSE was written, designed and directed by Gitanjali Rao. It is the first Indian Animation film ever selected to open Venice’s Critics Week.

FILM SYNOPSIS: Escaping from child marriage, a young club dancer living in the streets of Bombay must choose between fending for her family and finding love with a boy orphaned by the militancy. Painted frame-by-frame and woven delicately through music, a red rose brings together three tales of impossible loves. Love between a Hindu girl and a Muslim boy. Love between two women. Love of an entire city for its Bollywood stars. Based on true events, the film explores the ruthlessness of a society where the love and life that reigns on the big screen can crush you in its mean streets.

Director Gitanjali Rao will be in conversation with writer and journalist, Jennifer Wolfe, who will moderate the event.

DIRECTOR’S BIOGRAPHY: A self-taught animator and filmmaker, Gitanjali Rao emerged into the international stage with her animated short, Printed Rainbow which premiered in Cannes Critic’s week 2006 ( Kodak Discovery Award, Petite Rail D’Or, Prix Du Jeune) The film went on to win 25 awards and was short listed for the Oscar in 2008. Her four independently produced animated shorts have been to over 150 International film festivals and received more than 30 awards. They have been showcased in international art biennales in India, Poland and USA. Painted frame-by-frame, Gitanjali’s films travel seamlessly between harsh urban reality and the dream world created by the psyche, to escape that reality. While her depiction of urban reality has a documentary style, the intricate dream worlds are inspired from the rich and varied folk art styles of India. Her body of work includes animated commercials, pre-production for animated features, logo-motions, as well as graphic novels and illustrated stories. She is also an award winning actor on stage and in films. Bombay Rose, a labour of love made over six years, is her debut feature. For more info on Gitanjali Rao, please visit https://www.gitanjalirao.com/

SUBMIT YOUR QUESTIONS FOR THE DISCUSSION HERE

Registration is required to attend.

IMPORTANT: Those who register to attend by Friday January 8th at 10am will be sent a personalized screening link to view the film ahead of the virtual event

Questions about this event?
Email wia@womeninanimation.org