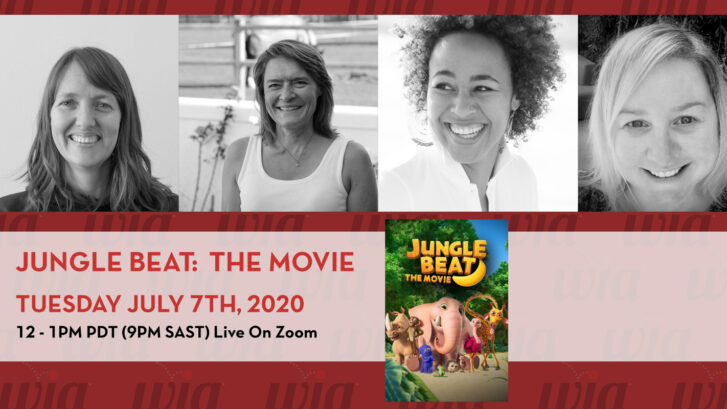 Join us on Tuesday July 7th at 12pm PDT for a Virtual Q&A with the women behind Jungle Beat: The Movie

Submit your questions in advance by clicking the link below:

THIS LIVE EVENT IS OPEN TO WIA MEMBERS ONLY.  THIS IS A TICKETED EVENT REQUIRING AN RSVP.  ONLY THOSE WHO RSVP WILL BE SENT THE MEETING LINK AND PASSWORD TO VIEW.  PLEASE REGISTER AT THE TOP OF THIS PAGE IF YOU WILL ATTEND – SPACE IS LIMITED!

Toni is a CG artist working at Sunrise Productions, having recently completed work on their feature film, Jungle Beat: The Movie, with the titles of Story Production Manager, Animatic Editor, Lighting Artist, Continuity Supervisor and Voice Over Artist. Over the past 4 years, Toni has been involved with the Cape Town International Animation Festival in varying capacities such as Volunteers Coordinator and Schools Coordinator. Toni has won awards for her work with the team that produced the short film Hewn, receiving a Gold World Medal at the New York Festivals TV & Film Awards, and winner of the Best Student Film at the 2018 South African Film and Television Awards. In 2017 Toni was named Animation Up-and-Comer and received a two-week guest internship with Nickelodeon Studios, Burbank. While relatively new to the industry, Toni has big ideas and big dreams.

Jacqui is the Co-founder and Executive Producer of Sunrise Productions. Jacqui produced Africa’s first animated feature film, The Legend of the Sky Kingdom.  Over the last 21 years, together with her husband and producing partner Phil, they have grown Sunrise into an international animation studio with world class talent. Jacqui has an expansive entrepreneurial approach to life and film-making, and has overseen and managed the build of Sunrise’s brand new full service animation studio in Cape Town, South Africa. Jacqui’s vision is to create world-class family entertainment, and to have fun doing it!

Rita joined Sunrise in 2002 and is a producer for the company. Rita has 20 years of production experience working in live-action and animated feature films, commercials, short films and TV series. Rita was based in Mauritius for the duration of production on Jungle Beat: The Movie, and was the Sandcastle Studios producer on the film.

Hayley is the Director of Marketing & Publicity for Sunrise Productions. A senior media executive with over 20 years of experience working in a number of high-profile marketing and publicity roles. She started her career in Westminster as a Press Advisor to the Shadow Home Secretary, before moving into entertainment PR. Hayley spent several years working for Oscar-winning studio, Aardman Animations, before joining Sunrise Productions and Sandcastle Studios. Hayley resides in Los Angeles and is on the PR committee for Women in Animation.