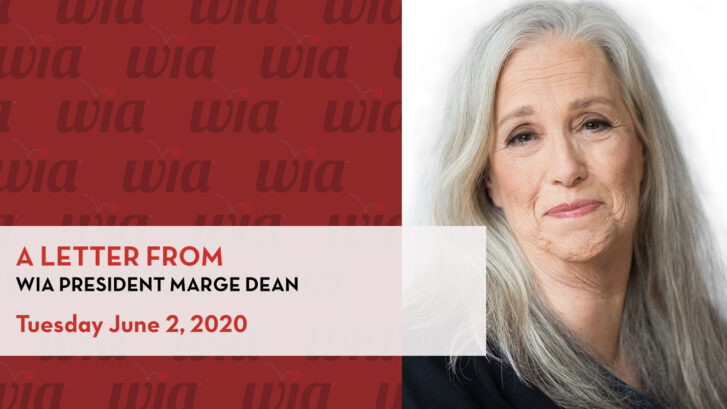 I appreciate the opportunity to connect with you, especially in our world’s more challenging moments, but this particular letter is one that I can’t write to do it justice. There are other voices that need to be heard rather than mine, so I invited Karen Rupert Toliver to share her thoughts, feelings and perspective in this moment. Karen is the Executive VP of Creative at Sony Pictures Animation, a member of the Advisory Committee of Women in Animation, a mom, and the Oscar-winning producer of the animated short, “Hair Love.”

These are Karen’s words:

As we have acknowledged, during this devastating pandemic, the Animation community has fared well compared to other industries. We can produce, which helps us stay financially viable, as an industry, and as individuals. It also has allowed most of us a creative outlet, which millions of people no longer have. So I have had a bit of “survivor’s guilt.” Maybe you have it, too. We all probably thought that was bad enough. Grieving became the new normal. My emotions have been all over the place. And then Ahmaud Arbery happened. And then Breonna Taylor happened. And then George Floyd happened. There are many, many others. And I started crying every day for different reasons. Then it hit even closer to home for those of us in Los Angeles and in other affected cities when, on Saturday, peaceful protests turned violent. Maybe some of you started getting scared of your city in a way you hadn’t expected. And the questions came up (thank you, Marge): how do I feel, what do we say, what do we do?

Maybe a place to start the discussion is waking up on Sunday to news coverage of the aftermath and hearing the reporters talking about the successful clean up and rebuilding efforts, i.e. painting over graffiti in Farmers Market, sympathizing with the business owners who, already hit by Covid-19, now suffer another devastating blow with the criminal activity. The thoughtful reporter offered comforting words to the victimized city saying, “The city will bounce back. We always do.”

As a Black woman, that comment intended to comfort partly infuriated me. In that narrative, the business owners are the victims; the looters are the criminals and attackers. The right thing to do is comfort and support the victims and all will be right in the world. Of course it completely ignores the totality of the city of Los Angeles, or the entire country. For the people inside the bubble, it makes complete sense. For Black people, it makes no sense at all. For white America, this is a moment in time. For Black people, it’s an everyday reality. And as Martin Luther King said, “rioting is the language of the unheard.” Maybe a few folks heard them this weekend. But was it only because it hit so close to home?

Why does it take rioting for this to become a national conversation? Weren’t the videos of any of the incidents enough? Would peaceful, countrywide protests without violence have made a dent? And far more depressing, is this national moment in time going to actually change anything in the long run? It was helpful for me to reflect on the civil rights movement and be reminded that sometimes peaceful protests did not move the needle enough. It was only when peaceful Black protesters absorbed white violence that white America took note and partnered with the Black community to make real change. People have a tendency to hide, to turn the other way, to stay in their bubbles. Change requires people to get out of their comfort zones.

Part of our job in entertainment is to help throw focus on that painful reality. We already know that our industry needs to be more diverse and representative. We must keep pushing. It’s urgent. But also advocating for diverse storytelling has a huge part to play. And in this area we are also not doing nearly enough. It’s not just about including Black characters in our stories. We need to influence hearts and minds to think differently. To remind us that we are all connected, that other people’s hurt is everyone’s hurt. We need to encourage people to not look away from uncomfortable things, but instead breathe into that discomfort. We need to use all the resources at our disposal to help move this cause forward. And one powerful resource is fearless storytelling.

Minutes before the curfew started I was parking my Audi, waiting in line at Simply Wholesome in View Park, picking up expensive chicken patties to take them back to my 15 year-old who was waiting in the house that I own. And our biggest concern was that they were out of the jerk chicken and he had to settle for regular chicken. All that to say, we were comfortably in our own “bubble.” I can try to disconnect from some pain of my community, however it’s not really possible as a mother to two Black boys. I worry every day when my teenager wants to leave the house and do something as simple as play ball in a park, or hang out with friends at a mall. And I have a new fear, as many Black people do, thanks to Covid-19, that the mask that my sons are now required to wear makes them more at risk of being shot than on any other normal day.

For myself and my children and my community, I need to decide how to do more than be sad, angry, and hurt because here’s the harsh truth about our personal responsibility: if you aren’t participating in trying to make change, if you are silent, you are complicit in maintaining the status quo. And the status quo continues to target and kill Black men and decimate the Black community. And this cause needs white voices to join the Black community. Do something and do it now. Find a way: Make leaders accountable; Advocate for policy changes; Donate money; Tutor; Get involved in Black community Organizations. Figure it out. Do it now. Force yourself out of your bubble. And stay in touch with this issue so it doesn’t die, again, in the next news cycle.

Women in Animation will not let this issue die. We stand with the black community and specifically the black community in animation. We are committed to making significant changes in the animation industry, our organization, our families and ourselves. I grew up in New York and remember the Newark riots in 1967, and I lived in mid-Wilshire with my young kids during the LA Uprising in 1992. Each time, we thought things would be different, and yet here we are again. WIA is committed to seeing that permanent change happens this time; even if it’s just in our small part of the world, the animation industry. (Which I say facetiously, knowing that animation is hugely influential.)