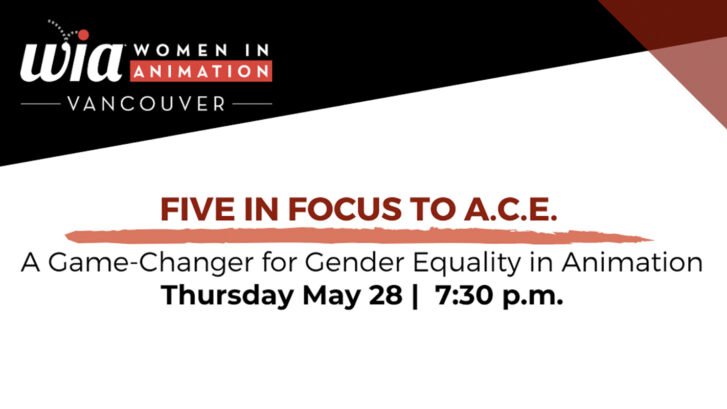 Women in Animation’s (WIA) mission is to advance women in the field of animation and the “Five in Focus” program, now the ACE or “Animation Career EXELerator” program, was created and designed directly to support this mission. This inaugural Five in Focus program gave five women in Vancouver a career-changing experience by placing them in key creative roles—Director, Writer, Producer, Animation Director and Art Director—and allowing them to create and launch their own short film. The program provided the women with financing, mentoring, pitch training, PR guidance, industry support, and the platform to launch their short film at the 2019 Spark Animation Festival. Hear from the participants of the WIA Vancouver and Women in View’s “Five in Focus” program, as they share highlights and learning from their experience, and how creating a short film as part of this program has helped boost their careers. This panel will also discuss exciting changes to the ACE program, how you can apply, and how ACE could be adapted for use in other regions and for in-house studio training programs.

Learn all about the ACE program and how to apply at wiavan-ace.org

REGISTRATION IS REQUIRED.  This panel will take place over Zoom. Please register in order to receive the Zoom link. Registration is open to WIA Members only.

Amanda Konkin has a masters degree from the University of British Columbia, and after a decade producing in theatre and digital media she transitioned into Film and Television in 2013. In the spring of 2015, Amanda co- produced a Leo-Nominated TV series for OUTtv called The Switch (2016), the world’s first transgender sitcom. She also produced the short films Dude, Where’s My Ferret? (2015) and Singer Sisters (2016), as well as the Storyhive award winning webseries pilot Silk (2015). In 2013, she created and produced a webseries amassing over 2 hours of episodic content called Blank Verse, about WIlliam Shakespeare as a modern day university student.

Amanda is currently a Production Manager in animation at Rainmaker Studios, a Division of WOW! Unlimited Media Inc. She previously worked as the Associate Production Manager on the Netflix original series Reboot: The Guardian Code (March 2018) and as a production coordinator on Surfs Up 2: Wavemania (Sony, 2017).

Kaitlin Sutherland’s life changed for the better when she discovered people could make animation for a living. Inspired by the limitless possibilities of the art form and its endless storytelling opportunities, Kaitlin dove in headfirst and thrived at the animation program at the prestigious Sheridan College. Animating on her first short film, with a group of her peers, “Natalie,” was selected to be screened on all Air Canada flights in 2014 via the Air Canada enRoute Film Festival and her personal short film, “The Tale,” went on to be a finalist at the Davis International Film Festival.

Thanks to her passion for animation and eye quality, Kaitlin quickly rose through the ranks in her professional career from layout artist to animation supervisor- a welcome challenge where she is currently excelling and constantly learning. Despite the time needed for her day job, Kaitlin’s passion extends well beyond that: she animates in her own time, participating in successful collaborative online projects as well as creating her own self-directed pieces. When she’s not thinking up unique stories or effortlessly designing a multitude of characters, Kaitlin can be found snuggling up with a tea and getting lost in the vibrant worlds and stories made possible through animation in Vancouver, B.C.

Stephanie Blakey is an award-winning, Vancouver-based animation director and storyboard artist. She received her Master’s Degree in Directing Animation from the National Film and Television School in England and her Bachelor’s Degree in Animation from the Emily Carr University of Art and Design in Canada. Additional training took her to La Poudrière in France, and the Animation Lab at the Edinburgh International Film Festival in Scotland. Her animated short, “The Last Resort,” has played in over two dozen festivals, winning several awards including the Audience Award at the Austin Film Festival and a Best of the Fest Selection from Palm Springs International Shortfest. An animated intro for the online Vice series, “Brits”, which she wrote, directed, animated, and scored, won the Graphite Pencil Award in the Design & Art Direction New Blood Awards. Another short film of hers, “Love-o-Rama”, was selected and screened as part of the NFTS Stars of Tomorrow Event. She currently works as a storyboard artist at Atomic Cartoons in Vancouver.

Maisha Moore is a production designer and illustrator living in lush Vancouver BC. Influenced by a childhood full of story books and a family tree of artists, Maisha was inspired to pursue a career in the arts. After graduating from Capilano University, Maisha settled into Vancouver’s vibrant animation industry, where, over the course of the last decade, she has worked on a multitude of projects, both episodic and feature. Her skills and passions cross over a breadth of production departments. Currently, Maisha is working at Cinesite Vancouver on The Addams Family feature as a lead in the production’s design team. Outside of her day job, Maisha collects oddities and travels to national parks.

Rose-Ann Tisserand is co-founder of Flying Kraken Creative Studios, a boutique, Canadian-based studio that creates original animation content and specializes in award-winning design services. She has more than 250 hours of award-winning film and television credits and has worked as a production executive for 20 years. She was supervising producer at Bardel Entertainment and is currently a Consulting Producer with the NFB and Executive Producer/Co-Creator of a series in development with Silvergate Media. She also sits on the Spark Animation Leadership Board and the Executive Board of Women in Animation Vancouver; whose mission is to advance women in the animation industry.

Tracey is honoured to Executive Produce the Five in Focus / ACE program with Women in Animation. She is an award-winning Producer with twenty years of experience, producing over 120 hours of television in both live action & animated film, television and digital media. She is currently COO / Head of Production for Imagine Create Media, where she is also a Producer on Scout & The Gumboot Kids for CBC, nominated for both a Prix Jeunesse and NHK Japan Prize. Through her own company, Urban Safari Entertainment, she has just finished development on the animated feature, A Christmas Crisis, with Hollywood Suite, which she also wrote, and has produced The Adventures of Little Jake & Many Skies for APTN, the award-winning Kids’ Cookhouse, and the web series PARKED.